Our flight to Seattle the morning of the cruise went smoothly. The only glitch was that Tom didn’t get TSA Pre-✓designation on his boarding pass this time so I had to go through the expedited security line without him and wait for him to get through the regular line. He has trusted traveler status conferred by AA (at least sometimes), whereas I have Global Entry. I think he’s now motivated to apply and go through the G.E. process. Yes, it’s a pain but it’s well worth it.

Not to worry, though. We were at the gate in plenty of time, had Priority boarding and were soon settled on the plane. The flight was smooth and we landed at SEA-TAC a few minutes early, at 11:00 a.m. We quickly collected our bags and walked across to the parking garage to get a cab, and we were at the cruise terminal by noon.

Many folks say you should never, ever fly in on the same day as the cruise, but so far it’s worked fine for me. A few caveats: I take the first flight out in the morning, I fly on AA (which has lots of flights out of DFW leaving to major airports every hour or so), and I would only do this in the summer. When we fly to Miami in December, we’re going in the day before in case of bad weather delays.

Anyway, we breezed through the check-in process at Pier 91 (it’s nice to have priority embarkation status) and we were on the ship in time to grab some lunch up on the Lido deck, explore the ship, unpack and get settled in before muster drill and sailaway. Soon we were watching Mt. Rainer recede in the distance.

This was my second cruise on the Miracle to Alaska this season, and in many ways it was even better than the first. Or perhaps I should say they were both fantastic, but in slightly different ways.

I had a great time with my cousin, but having my husband with me this time made it special. And certainly Alaska itself changed from early May to early July. Even the first time, it wasn’t nearly as cold as I expected. This time I knew better than to pack a heavy jacket I would never wear. Whereas in May the trails at the top of Mt. Roberts in Juneau were covered in snow, this time they were flanked by lush green vegetation. 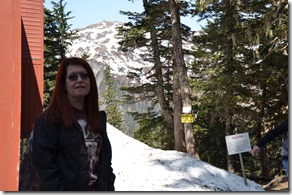 But the weather wasn’t the only thing that had changed. The traveler demographic was different, as well. The Alaska crowd still seems a little more sedate, a little less “party-hardy” than the Caribbean crowd, but the May 6 sailing went on while school was still in session, and we saw hardly any children at all. This time, school’s out and there are almost 400 guests under 18 on board according to the statistics John Heald posted. We definitely saw them (and heard them). 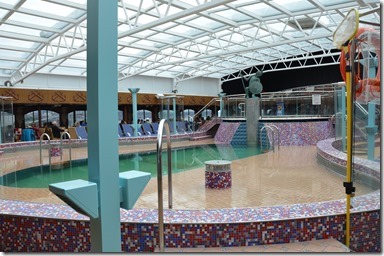 The covered pool was empty most of the time on the earlier sailing; this time there were usually a few kids in the water when I went by. Still not at all like the Caribbean, but different from before.

Not everything had changed, though. The ship itself was a familiar presence, and knowing how to get around on her from the beginning was comforting.

After we stowed our carry-ons, I went straight down to the Shore Excursion desk to book our Behind the Fun tour and then over to the Future Cruise Desk to book the September 2015 cruise we had decided on earlier (although it turns out I might be having to make a change to that one; after getting this taste of our northernmost state, Tom is thinking about coming back with me on the Legend’s inaugural Alaska sailing next summer instead of doing that Freedom cruise. I’m hoping he’ll find some way to do both, but we’ll see).

My old friend Todd was still manning the FCD and like before, he went out of his way to help me find the best deal possible – snagging us a grand scenic oceanview cabin at a great price.

Those bits of business taken care of, I went back to the cabin to find Tom settled in pretty nicely. Next I got down to the task of decorating our door. When that was taken care of, it was time to venture out. I showed Tom around the ship first. I love the Spirit class ships so much – I wish we had one sailing out of Galveston.

We walked the ship, from the restaurant to the piano bar to the chapel to the casino to the theater to the comedy club. We checked out the action in the main lobby, which was hectic as always on the first day, and the Serenity area where things were more, well, serene. 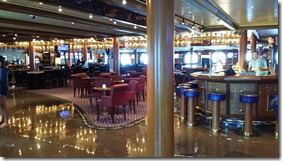 We ended up on the Lido deck at Horatio’s, where we grabbed some lunch from the buffet
.

We finished eating and it was soon time for the muster drill. That didn’t last long (somehow it seems to go faster on the Miracle than on the Galveston ships – maybe it’s because John, as cruise director, adds a bit of humor to the presentation). After muster, we went back to th

e cabin to watch sailaway from our balcony and start getting ready for dinner.

I had booked us an obstructed view balcony, after the great experience with the obstructed view premium balcony that Sharon and I got as a last minute upgrade from our French door interior in May. I have my PVP to thank for recommending the particular cabin that I got this time, as it was perfectly located so that the lifeboat under it didn’t interfere with the view even a little bit. The cabins on either side of us had pulleys that stuck up and did get in the way, but all we had was the top of the life boat even with the balcony floor so that it looks like an extension of the decking. 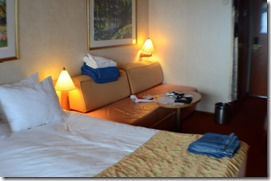 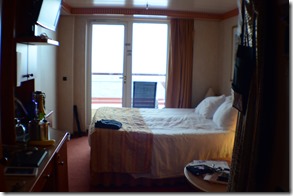 Now I know which obstructed balconies are best, for next time. The obstructed balcony is good bit less expensive than one without that designation so I’ll be looking for those deals again. I was a little nervous about how Tom would take to a balcony cabin since he had only sailed before in a grand suite (can we say “spoiled a little”?). After the initial reaction that naturally consisted of “wow, this is cozy,” he decided the smaller space is laid out so efficiently that it works fine for him, and that the extra $1500 or more for a suite is an unnecessary luxury unless it’s a very special occasion. I agree (and I don’t even mind an ocean view cabin, although I probably wouldn’t be comfortable in a regular interior due to a touch of claustrophobia).

Update: a few weeks after we got back home, Tom did decide to go back to Alaska with me on the Legend next year, and my most excellent PVP was able to upgrade me to the same premium balcony cabin that Sharon and I had on the Miracle in May. I know Tom will the extra space, at a much lower price than a suite.

We had selected Your Time Dining, and Tom’s used to eating early at home (plus our body clocks thought it was already two hours later than Pacific Time was telling us it was) so we headed down to the dining room at 5:15 pm (opening time). There was already a line formed, and we figured we’d get there earlier the next day to get a better table. That first night, we were seated at a table for two in the middle of the 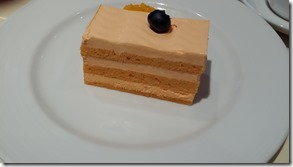 upper level of the Bacchus dining room (the only one on this ship, which is at the aft). Our wait staff members were fine – they did their job, but didn’t really stand out personality wise, although that could have been due to the rush-rush nature of the first day. I had my usual chicken a la greque and the orange cake for dessert, which are two of m

y favorites. Tom got to have his cheese and fruit plate that he had loved on his first cruise, too. Dinner was good, and we had a bottle of Moscato that we finished along with it.

That evening we did some more walking around the ship, checked out the fitness center, and went to the Welcome Aboard show, where To

m got to see John in action as CD for the first time. The show was similar to the same show on the Miracle, but it was still funny.

When we got back to the cabin, not only did we find our bed turned down and the standard towel animal perched on the bed along with the usual chocolate squares, the next day’s Fun Times newsletter/activities schedule, and the 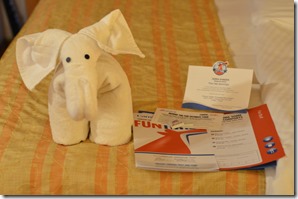 invitation to the Gold/Platinum/Diamond party scheduled for the next day, July 3, but we also found a platter of chocolate covered strawberries, a bottle of champagne, a 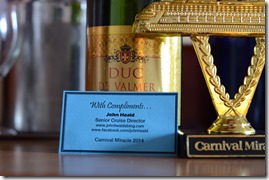 “ship on a stick,” and a nice note from John welcoming us aboard (even though I had explicitly told him we didn’t want any gifts). He’s not just a great CD and hilarious entertainer; he’s also a genuinely great guy.

We relaxed in the cabin and watched the beautiful sunset over the ocean, with the Canadian coastline in the distance. We caught up on our email, 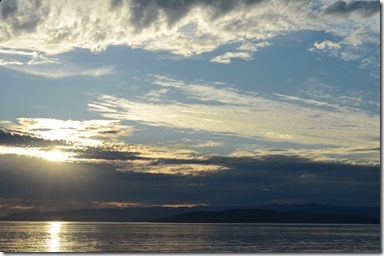 posted some photos for our Facebook friends who were sailing vicariously through us, and talked about what a great day it had been.

We were tired but didn’t get to bed until around 2:00 a.m., which was more like 4:00 a.m. for us since we were still operating on Central Standard Time.

Tomorrow would be our first full “fun day at sea” and we were headed north – to Alaska.