And to all, a good night

After getting off to rather rough start, thanks mostly to some uncooperative Texas weather (and described in Part One of this post), the first evening on board the Freedom for our 22nd anniversary getaway turned out rather nicely.

Following muster, we had a chance to explore the ship. While I know its layout pretty well, given that I previously sailed four times on her, for a total of thirty-three days, I hadn’t been on her during the Christmas season before, and it was nice to see her all dressed up for the holidays. 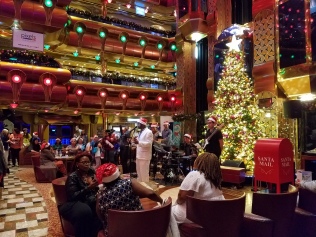 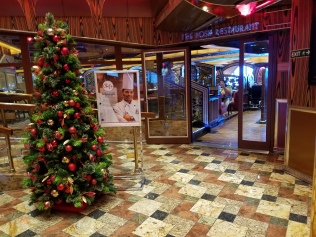 There didn’t seem to be as many Christmas trees as we’d had on Breeze two years prior, even taking into account the difference in ship sizes, but they did a beautiful job with the lobby area and the ship felt festive.

Coming back to the cabin and stepping out onto the balcony now that we were finally underway, all I had to do was look at the ocean surrounding me and know that this is what makes all of that – the Houston traffic, the torrential rainfall, being stuck in a parking lot for half an hour wondering if we were going to make it to the ship – worthwhile.

This massive dose of “vitamin sea” is what makes the stress slip off, washed away by all that water, as we leave land behind and with it, the worries of work and home and politics and world events and the big conflicts and the petty arguments, and boldly go where many men have gone before, and keep on going over and over again, lured by the beauty and grandeur and power and majesty of the sea. 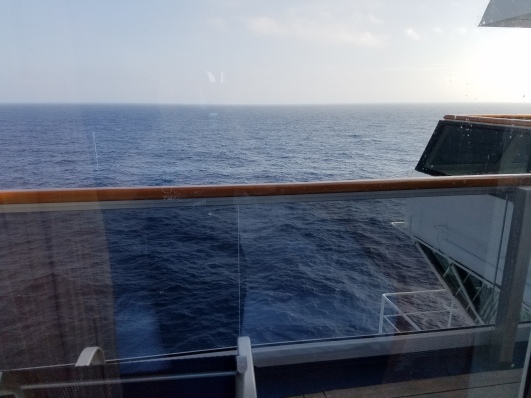 Many people go to the main dining room (MDR) soon after embarkation to check on their table assignments (and request a change if they don’t like them). Since we always do Your Time Dining – more on that later – there was no need for that. But there was something I did want to check on.

We had booked the Chef’s Table, which is a special limited-capacity dinner for 10 to 12 people in a private venue with a very special menu and much personal attention from one or more of the chefs. You can book this prior to sailing, but you never know which night it will be scheduled for until you get on board. As part of making this anniversary cruise special, I had also booked a reservation for the steakhouse on the last night of the cruise, so I needed to make sure the two didn’t conflict.

We trekked up to the Sun King Steakhouse on deck 10 (which, if you aren’t intimately familiar with the layout of the ship as I am after five cruises on her, can be a tad difficult to find). Although Chef’s Table isn’t held there, the steakhouse personnel handle the bookings. 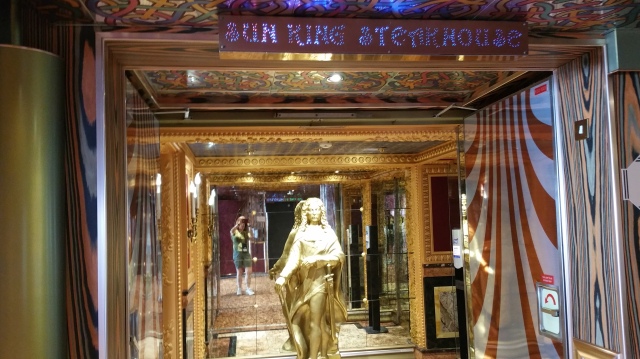 It turned out that our Chef’s Table was to be on the first port day (Progreso). That wouldn’t have been my choice, since our Progreso excursion was an all-inclusive resort with – you guessed it – unlimited food, but okay. At least I didn’t need to change the steak house reservation.

I usually select YTD as my dining option, especially when Tom’s cruising with me. This means we can go to dinner whenever we choose between 5:45 and 9:30 p.m. I prefer YTD because – let’s face it – some days you get hungry early, other days you don’t feel like eating until later. A lot depends on whether, when and what you ate that day in port or on the ship. After all, it’s vacation; why tie yourself down to a rigid schedule?

Of course, there are those who prefer the structure of having a fixed dining time and knowing they’ll be at the same table every night with the same companions either at their table or nearby. It’s just a matter of personal preference. In addition to the time flexibility, I like that I can either request the same wait staff/table on subsequent nights if I want, or if I wasn’t thrilled with them, try different waiters and location. It’s all about options.

We always get a table for two, but most of those are close to the table for two next to them. This is the best of both worlds – you can easily meet and make conversation with those around you if you want, but you don’t have to feel obligated to do so as you do when you’re seated at the same table – nor do you have to wait for someone else (who might or might not show up that night) before you can get your food. 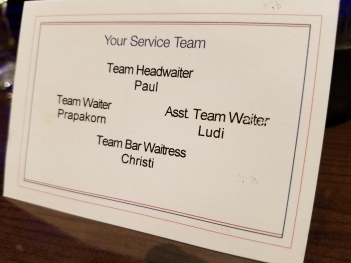 On this first evening, our head waiter Paul and his assistants Prapakorn and Ludi were friendly and provided excellent service, and after the long and difficult day, we were both famished so it was even more appreciated.

I started with a bowl of corn chowder. Hot soup was just the thing after that cold rain and wind, and it was yummy. Tom opted for both the chicken quesadilla and salmon strips appetizers, and apparently they were good, too, since they disappeared in record time. 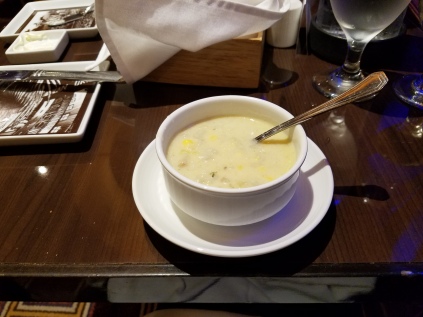 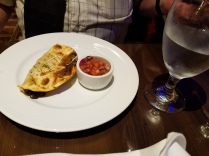 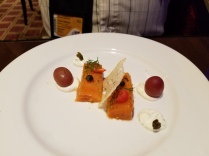 There were a couple of entrees on the menu that looked good to me (remember – I was still starving), and I went for the most hardy of the lot: the vegetarian lasagna. I’ve had it several times before and it’s one of my favorites. I wasn’t disappointed this time; it came out piping hot and loaded with cheese. And as we all know, cheese makes everything better.

Tom got the “port o’ call” dish. Since we were still in Galveston, what could be more appropriate than barbecued brisket? It came with pinto beans and a “corn thing” atop a slice of sweet potato. Not the biggest portion in the world, but after all, he had just eaten two appetizers. 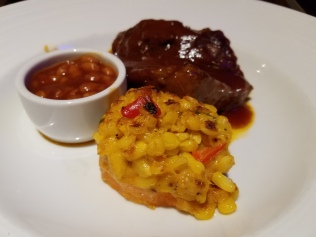 By the time the dessert menu came around, I was pretty full. That is a big plate of lasagna. Tom got what he almost always gets: the fruit and cheese plate. I passed on dessert – or rather, I ordered mine in liquid form: a Jamaican coffee. After all the comfort food, it was the perfect way to keep me warm and finish off a fine meal. 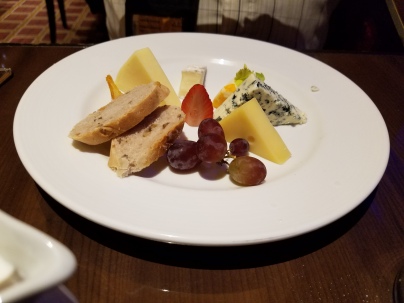 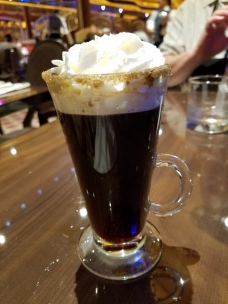 Rock me to sleep

After the long and difficult day, neither of us was up for much in the way of partying after dinner. We walked through the ship again and stopped to enjoy a little music in the lobby, then went on back to the cabin. The weather had kicked up a bit again, and the ship was rocking and rolling – which I love. Well, as long as the plates don’t slide off the tables. And this wasn’t that bad; there was just enough “ocean motion” to make it difficult to tell whether the people walking down the hall in front of you (not to mention you, yourself) were staggering because of a few too many drinks or were perfectly sober. 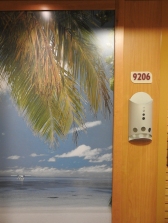 One of the nice things about having a cabin on the Lido deck is that you can quickly get to the buffet, whether to eat lunch or just to grab a late-night cup of coffee. However, when the weather is rainy, that straight shot to the ice cream machine (because let’s face it, that’s what we really run to the back for before bedtime) becomes a little less convenient, since you have to go outside through the pool/dive-in theater area to get there.

That’s why I got in the habit of going down to 8 (or even 5) and then back up when I wanted to go from my cabin to the buffet or vice versa.

At the cabin, we encountered the first of many towel animals to come, along with the next day’s Fun Times and a new touch: a business card from our cabin steward. I think that’s a great idea; in the past I’ve had stewards whose names I couldn’t remember after the cruise was over, and I’d love to get a business card from each of mine. Hey, it’s yet another bit of cruise memorabilia to collect, to serve as a reminder of this cruise for many years to come. 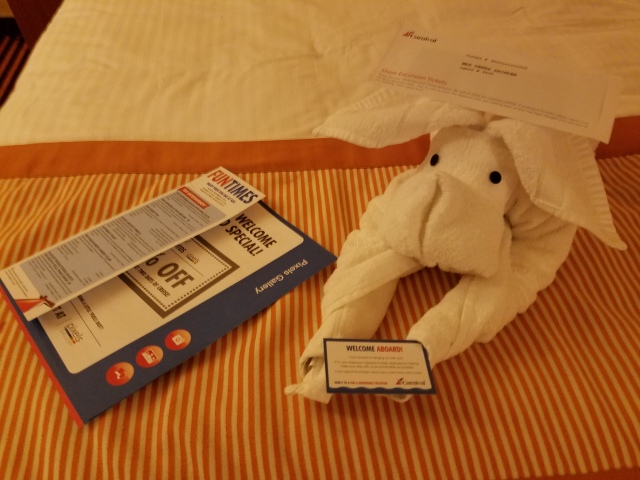 I was looking forward to a nice, lazy, relaxing sea day on Sunday – and it was indeed nice, although maybe not quite as lazy as I’d envisioned. This was, after all, only a five day cruise. That means a lot of onboard activities to pack into just a couple of days.

If you’ve read this far, I hope you’ll come along for the ride in Part Three.