Taking it to Tampa, Day 3

On our last full day in Tampa, we got up relatively early because we had places to go, people to see, things to do. Tom was finally getting his day at the track, while I was going to meet up with some of the Floridians I knew for lunch.

After much discussion, we had decided on Cheesecake Factory and my friends Warren and Lesli – both of them fellow writers whom I’d know for more than twenty years online but had never before met in person – were kind enough to come by and pick me up at the hotel so Tom would have the rental car. 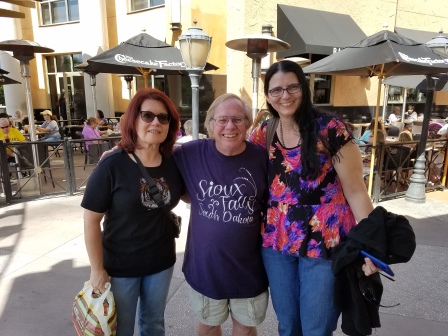 Soon Tom was off in search of a winning horse and I was able to shower and get ready at leisure and in solitude. It can be difficult, when you’re used to having 4000 square feet of house for two of you to spread out in, to be cooped up in a hotel room with another person – even if that hotel room is a two-room suite. First world problems, for sure.

It was great to finally get a face-to-face meetup and a hug from people with whom I have shared so much over the years. At the restaurant we were soon joined by a long-time friend and fellow Japanese Chin owner (also named Deb) whom I’d met in the “real world” only once before when she traveled to Texas for one of our Chinfests, along with her mother, Barbara.

The Cheesecake Factory was absolutely packed so we had a bit of a wait for a table, but finally we were seated and had a wonderful visit over some great food. As always, I took photos for the reviews and so Tom could live vicariously through my meal. 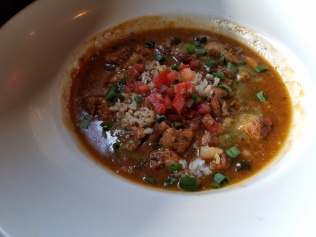 Cheesecake Factory can always be relied upon for consistently good fare, and the menu is so extensive that it’s easy for everybody to find something, whether you’re dieting and ordering off the “Skinnylicious” menu or going for the hyper-caloric entrees and desserts. On this day, I was trying to stay somewhere in between, and Chicken Chili and sweet potato fries hit the spot for me.

Our last supper (in Florida)

Back to the hotel, and I had an hour or so to relax before Tom made it “home” from the track. Apparently he’d had a good time, and he came bearing gifts: souvenir tee shirt and shot glass for me from Tampa Downs, as well as a new cap for his collection.

The plan was to have dinner at Columbia, but that plan fell through when we found that there were no reservations open until late. We had foolishly thought that a restaurant capable of seating 1700 people would have empty seats early on a Sunday evening, but we learned that when a restaurant is this popular, that’s not the case.

Luckily, we did have a second choice in mind. We wanted a special place to have dinner on the last night of our first visit to Tampa, so when we went back to the drawing board (or rather, back to the web search), we picked Shor because of the reviews, menu, and because we wanted to see the Clearwater beaches that we’d heard were some of the best in the country. 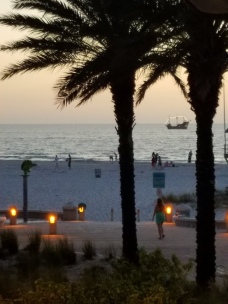 Getting to Clearwater was a fairly easy drive from where we were staying Tampa. Getting to the restaurant itself was a bit more challenging. The traffic in Clearwater near the beachfront street (Gulfview Blvd) was horrific – reminiscent of La Jolla. The restaurant was easy to find but as we passed it on Gulfview but where to park was much less obvious. I ended up having to call them and ask where to park.

It turns out Shor is actually inside the Hyatt and you can park in the Hyatt garage, entry on the opposite side of the building. Shor validates the parking ticket.

Once we got there, we found the hostesses and wait staff to be extremely friendly and personable, the view stupendous and the food delicious. We chose to be seated on the patio, and we got there shortly before sunset and were treated to a glorious sky over the water (and great photo opps). 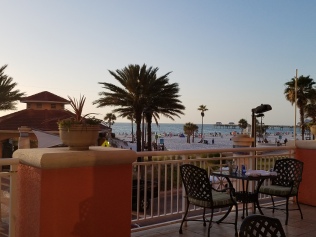 We started with drinks and I had a piña colada (okay, I had two). All piña coladas are not created equal, and these were of the best type, very smooth and creamy. Tom had a drink that was recommended by the waiter, with five kinds of rum and fruit. 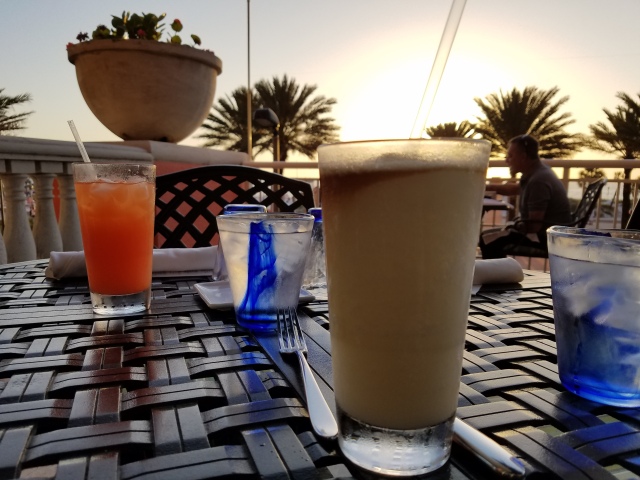 I started with an appetizer made of potato, breaded and covered in a slightly tangy sauce. Tom selected the “she-crab soup,” which he apparently enjoyed since it all disappeared quickly.

We were also served soft pretzel bread with the appetizers, which was hot and very good. My entree was the lobster ravioli, which consisted of five large stuffed pastas that were fat and full of shredded lobster meat in a creamy white sauce. It was wonderful but very rich and I was unable to finish it – I left one piece, which I really hated to do but by that time, I was as stuffed as the pasta and unable to take another bite.

Tom once again had the lobster mac & cheese. Unlike the dish by the same name that we’ve had at many other restaurants, and the one that he had at the Courtside Grill the night before, this one came out with not one but two plump medium sized lobster tails resting on top of the pasta. I had a taste and it was very good. He did manage to finish his, which amazed me as it was a very generous portion. 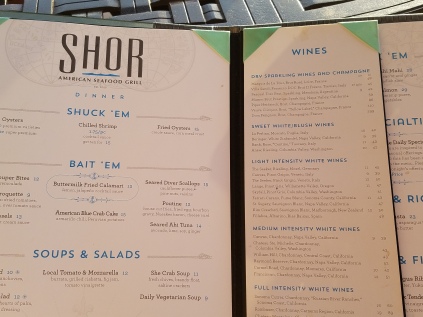 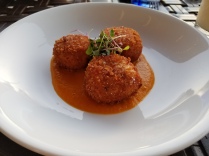 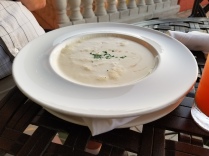 We sat and enjoyed the sunset and the ambiance which, despite the large crowds and loud noise, was very pleasant. The weather was perfect, the waiter was extra attentive, and we ended the evening with a gorgeous sunset. I would definitely go back again – even knowing what kind of traffic you have to fight.

Thus ended our last real day in Tampa. Morning would bring an uneventful trip to the airport, rental car drop-off, and a wait in the Admiral’s Club for the plane that would take us back to DFW and back to reality after a nice but too-short break.

One thing we learned on this trip was that Tampa was much nicer than we expected, with much more to do, and there was no way we could even come close to seeing all that we wanted to see and doing all that we were interested in doing in a short four-day weekend. I have a feeling this is a city we’ll visit again, and maybe next time we’ll plan better and manage to have dinner at the Columbia.