The never-ending review: Such sweet sorrow 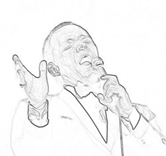 But nothing lasts forever (except, apparently, for my supply of clichés) and it’s knowing there will be an end that motivates us to make every moment count. That’s how I felt about my last day on the Seaside.

I woke up Friday morning to the familiar sight of the ocean waves outside my window, knowing it was likely the last time for a while that I would open my eyes to that particular sight (although I am blessed to wake up every morning at home to look across the water of the ocean-substitute that is the lake on which I live).  The next morning, we would be back in the port of Miami by the time I was up and about, and the open sea would be behind me until the next time.

But I didn’t want to waste time mourning what wasn’t yet lost, and I had a lot yet to do before I had to leave this sweet suite that had served me well for the past seven days.

If you’ve been following this Diary of a Crazed Cruiser from the beginning, you can easily guess how I began the day. Room service (just coffee this time), a shower, and then to the lounge – which I suspected was the part of Yacht Club I would miss most of all.

Only a few days before, I had hesitantly crossed that threshold from the hallway (hesitant not so much out of apprehension about what I would find or the welcome I would receive as new-found wariness of clear glass doors that might be lurking in what appeared to be an open doorway – the bump on my head was no longer noticeable in the mirror, but still slightly sore to the touch).

On that last day at sea, I walked in as if going to another room in my house; that’s what it becomes for Yacht Club cruisers (or at least for me) – an extension of “your” space, your cabin.  It’s more public but it still feels private. It’s a place where you can meet up with the rest of the “family” – or find a corner to claim as your own retreat. It’s hard for me to describe (or even understand myself) my love for the Top Sail lounge. You have to experience it for  yourself (and your experience might or might not be similar to mine).

More coffee and croissant consumed, email answered, Facebook friends duly apprised of where I was and what I was doing, and then I was off to the first scheduled “event” of the day – an impromptu gathering at 11:00 a.m. of some of the Faceb

ook group at the Miami Beach aft pool area on deck 16. The purpose was for everyone to bring their “leftover” bottles of champagne (received as black card and/or Yacht Club perks) and share a last round of toasts to a great cruise.

I arrived to find a table of 6 or 8 people already assembled, with several bottles of bubbly and orange juice for making mimosas. We sat and talked, shared our thoughts about the cruise and the ship and the cruise line, and for some of us, said our goodbyes since we didn’t know whether we would get together again before debarkation.

Although group members were still arriving, I had to leave a little after noon as I had reservations for Teppanyaki (again!) for lunch with a different set of friends.

The Teppanyaki lunch was similar to, but different from the first time. Of course you can never truly duplicate an experience exactly even when all the elements are the same, and it was very good, but not quite as great as on the first sea day. First, we had a different chef; he was completely competent as a chef but not as enthusiastic and natural as an entertainer as Joseph had been.

The second factor that probably impacted the overall feel was that the first time, our group was alone in the room. This time, three of the four hibachi tables were filled, so there was some distraction from the other chefs and other diners at the other tables.

The sashimi was a different fish (it was fine, but I didn’t like it as well as the white fish on the first day). I ordered the same meal as before (Katana), and the mahi-mahi, rice, chicken and veggies were all just as good. The ice cream/pineapple dessert tasted the same, although the presentation wasn’t quite as pretty.

It was still a very good time and a very good meal, and if I hadn’t done it the other way first, I would have been completely impressed. Everything is relative, they say (notice we keep coming back to relativity, for some reason). Standing alone, this was a great experience. In comparison to the first time, it was slightly lacking.

One thing that was identical about this Teppanyaki lunch and the first one: I felt just as stuffed afterward. So I needed to walk it off. I also was concerned that I hadn’t gotten as many photos of the ship’s public areas as I’d like, for the blog, so I thought I could take care of both at the same time, and set out on my final long walkaround.

One of the places I had neglected was the Garage Club Bar area, so I went down to deck 7 aft to capture more photos of it. This is a little blast from the past, decorated with a 50s motif and complete with classic cars and a “soda shop.” It’s a cute concept. Also in this area is the bowling alley, F1 simulator, and arcade games. 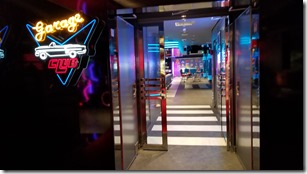 I covered much more of the ship on that walk – basically all of the common areas on decks 5, 6, 7, 8, 16 and 18. I’ll use the photos I took in the “Ship design and environment” and “Dining and drinking experience” sections.

Meanwhile, here are a few random shots of different parts of those areas.

The theme party that evening was Pirate night, and the atrium was already decorated for it. I hadn’t bothered to bring my pirate costume (yes, I do have one, from a previous cruise) and was pretty sure I wouldn’t make it to the party since I still had to pack, but I did get a shot of skulls hanging in the atrium.

Since I was going to be cruelly kicked out of it and forced to hand it over to the next occupant in less than 24 hours, I wanted to spend a little time in my cabin before dinner, so I headed back up to the Yacht Club around 6:00. I sat on the balcony, enjoying the breeze and the peace and calm, until it was time to get ready for … the last supper (or more accurately, dinner, since supper technically is a light evening meal, and there is nothing light about meals in the YC restaurant).

Scott, Rich, Bob and Frank were kind enough to allow me to join them again, for what turned out to be Italian

night in the YC restaurant. I had brought a red, white and green outfit but I ended up forgetting to wear it. Arthur, however, was appropriately dressed for the occasion and looked dashing in his vested of Italian colors.

NOTE: There is some obvious confusion in the groups and forums about the various theme nights. On our sailing, Gatsby and white night seemed to be the ones for which more people dressed up. Italian night seemed to be more a theme in the dining room, rather than a special party and “Atrium moments” night like the others. Don’t worry about having to take clothes for all those themes; just pick the ones you like (or already have the appropriate dress for), or if you like just ignore them all.  You won’t be alone in not being dressed thematically.

There was a lot of good conversation – among ourselves and with Arthur and Luigi, and we lingered long over dinner to the point that the restaurant was almost deserted when we finished.

We did, however, gather for a goodbye photo with Arthur, which turned out really great and is the perfect memento of my first (but definitely not last) experience in the Yacht Club. 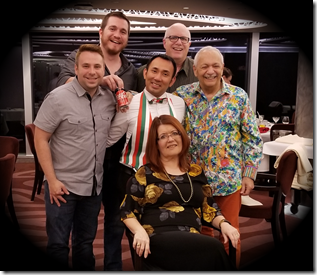 The last chore of the night was to finish packing my bags and set my checked bag out before 2:00 a.m. to be picked up. Morning was going to come early, I knew – the captain had announced that we could expect to get into port before 7:00 a.m., and we had to be out of our cabins by 8:30 so they could be cleaned up and prepared for the next round of guests. However, we could stay in the lounge until 10:30, and I intended to take advantage of that and hang out as long as I could. Why leave any sooner than I had to?

It had been a great cruise. In fact, I would say it was a game-changer for me. It opened my eyes to a brand new way of cruising, one that I could easily get used to. It introduced me to new friends I would never have met otherwise. Trying something new and different is always a gamble. This one paid off handsomely. As I drifted off to sleep that night, I was sad to be leaving, but glad that I would be seeing my husband and home and pets soon, and happy that I would be back on Seaside again in a few months.

Many thanks to Ray McDonald, who arranged the group booking and led the Facebook group for the back-to-back cruises (only the second half of which I was a part), and who also blogged about his own experience in a Fantastica cabin. Those who are booking that experience level should check it out as it may be more directly relevant than my Yacht Club experience.

Also thank you to Mohammed Rai, Arthur, Luigi, Ivan, Ziggy, Judith, Captain Massa and the rest of the “cast and crew” of the beautiful Seaside, and to all my fellow cruisers on the February 17, 2018 sailing and all of the new friends that I met on this voyage. We had the privilege of sharing something special.

I’ll drink to that.